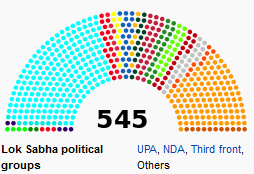 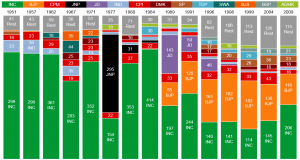 Here are some interesting outcomes after plotting all election data.

Anil Basu‘s victory at Arambagh, WB had the largest margin CPM or any party had seen: over 5.9 lakh votes.

On the other hand, Som Marandi (BJP) and Konathala Ramakrishna (INC) won by just 9 votes in Bihar, 1998 and AP, 1989 respectively.

Until 2004, Outer Delhi had the highest number of voters polled (15 lakh). After the 2008 delimitation, that mantle went to Malkajgiri, AP (12 lakh)

Lakshadweep has the lowest number of votes counted consistently across the years, with close competition from Dadra & Nagar Haveli.

Nalgonda, AP fielded a record-breaking 480 candidates in the 1996 elections, with Belgaum, KA a close second in the same year.

Since 1989, no election was won uncontested. Srinagar, J&K was the last, where Mohammad Shafi Bhat of JKN won without competition.

Only two elections had women candidates exclusively: Karur, TN (1967) and Panskura, WB (1977). Only 8 elections have had more women than men.

Arif Ahmed Shaikh Jafhar (NBNP) contested the 2009 elections from Dhhule, MH at age 99, making him the oldest candidate ever in India

The Doordarshi Party, founded by Baba Jai Gurudev in 1980, has the record of contesting 716 seats across 3 years without a single victory

The INC is among the most successful parties, being one of the few parties that has won more than 50% of the seats it has ever contested in

Note: All this information is taken from and belongs to Gramener. We are just putting it as example to showcase power of Big Data.

Update this to the latest results 🙂